The Mayberry Café is a special stop in the middle of Hendricks County across the street from the County Courthouse and the Danville town square. Owned and operated since 1989 by Christine and Brad Born, the Mayberry Café is filled with memorabilia collected by Brad about his favorite television program, The Andy Griffith Show. 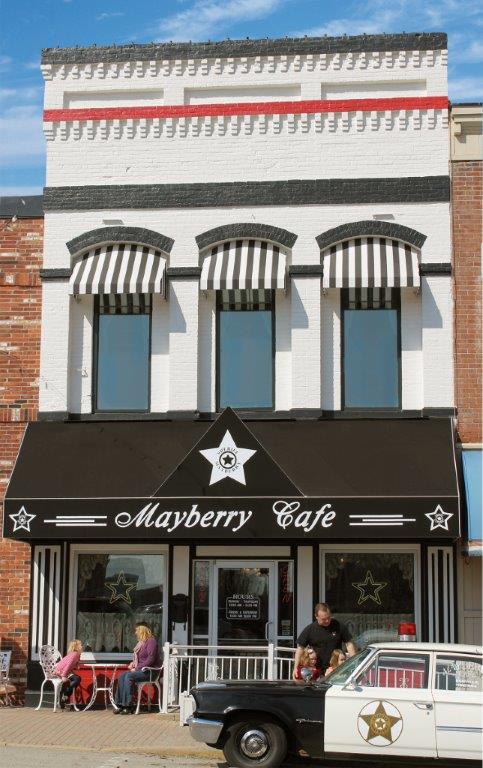 “He always wanted to live in a place like Mayberry,” said Christine, “and we’ve found the people in Danville are about as decent and loyal as you’d find in Mayberry.” The owners’ commitment to quality and the community has made The Mayberry Café and Danville a tourist destination. In fact, several of the original cast members have visited the Mayberry Café including Jim Nabors (Gomer Pyle), Jean Carson (Daphne), Rodney Dillard Bank (the Darling boys) and Maggie Peterson (Charlene Darling). Although Barney and Andy never visited us, their daughters Karen Knotts and Dixie Griffith have been known to stop by every spring. While the cozy ambiance and fun atmosphere draws people from far and wide, the hearty portions of excellent home-cooked food brings them back time and again. Brad starts each day with fresh ingredients to make dishes like meatloaf, potatoes, slaws, sauces, salads, and more from scratch. Meals are served by a staff of hand-picked and long-time employees. Visitors get their fill and then stop as they leave to take a photo with the Ford Galaxie squad car parked out front. For sure, Christine and Brad make it possible to find good food, personal service, a fun atmosphere, and a taste of the Mayberry life, right here in Danville at Indiana’s own Mayberry Café.